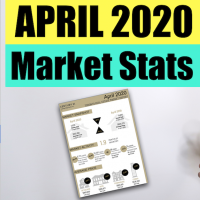 **CHECK OUT THE FULL TRANSCRIPT BELOW**

One thing to note is that the media and most others will be reporting the "Average Price Changes" in Toronto; and particularly for the month of April, those "average" numbers are a bit skewed since a large portion of luxury properties were taken off the market. So which statistic is more accurate to look at then? Well, take a look at the Benchmark Statistics here, which reflects the "typical" price of a property given a specific area, without considering the lower end or the higher-end portion of the market.

Below are the clickable timestamp links for the video:

What the media reports for real estate stats 0:18

How average price is calculated 0:27

The issue with average price statistics 0:37

What is the benchmark statistic 0:58

Average price changes in April for the GTA 1:45

The issue with the average price change for detached homes 2:51

What benchmark prices are telling us for detached homes 3:46

What are Benchmark Prices 5:05

Average price for a condo 6:02

Why benchmark prices are more accurate statistics for condos in April 6:12 and 6:55

Volume of Sales / Number of Sales in April 7:44

Sales volume is not related to price 8:18

Impact of AIRBNB on softening prices 9:00

Final thoughts for buyers waiting on the sidelines for long term hold purchase 9:55

So in today's video we're going to talk about the real estate numbers in Toronto for the month of April. Now because April

was on lockdown mode due to covid-19, I know everybody's curious about the numbers. So let's get into this.

So the average price change is what the media likes to report and it's also the statistic that is most frequently mentioned.

The average price is calculated by taking the total dollar sales volume and dividing it by the total number of sales in a given period of time.

Now the second statistic that we'll look at is the Benchmark Price, which is determined by the home price index.

So the most important factor that everybody wants to know about is price. And when we look at the average for April, there was a neutral point +0.1% increase in price between April 2019 to April 2020.

In comparison, the benchmark price for a typical detached home in Toronto is similar at $1,221,200.

When we look at the average price change over the past year, it looks like the detached housing market took the hardest hit. And these are the numbers that are going to be reported in the media. In the 416 Toronto area, the average price for a detached home in Toronto was down -7.8% between April 2019 to April 2020.

The average price change for a detached home in the 905 suburb area was a little bit more of a neutral -0.8% decrease.

So by removing a large portion of these luxury homes off of the market, what you're left with is an average price that is significantly lower and that's reflected in the decreased price of -7.8% on average for detached homes.

This is when it's a good idea to take a look at the MLS Home Price Index.

If we take a look at the Benchmark prices as well as the percentage change in home values over the past year, you will notice that all of the benchmark prices have actually increased quite significantly in the past year. So basically what this means is that the smaller detached homes in Toronto that are priced on the lower end of the price range, they were actually selling very well for the month of April and they didn't decrease at all in value. In fact, they went up by +7.95% in value over the past year.

So just remember, because the media likes to report a lot of negative news, when they mention that detached houses in Toronto dropped on average by -7.8% in value for the month of April, they are correct in quoting the average price, but just understand that the average price number can be very skewed. And for the month of April because there were much fewer luxury detached homes in Toronto that were actually on the market, it's more accurate for us to take a look at the benchmark price changes instead of the average price changes.

On average semi-detached as well as townhouses increased in value between +3.5% to +4.5%, in value, between April 2019 to April 2020. Similarly, the Benchmark prices for semi-detached as well as townhouses, both saw double-digit percentage increases. So based on the Benchmark statistics, April still saw a strong demand for the typical low-rise home.

Now, let's take a look at the condo market. The average condo in Toronto is sitting at $612,300. And just like the detached housing market, quite a big portion of the luxury condos were taken off market for the month of April. And this is why the average price is lower than the Benchmark price.

So in comparison the Benchmark price for a typical condo in Toronto, is sitting at $631,800.

When we look at the average price change over the past year between April 2019 to April 2020, the average Toronto condo has dropped -4.0% in value. While the 905 suburb area saw an average price increase of +1.5%.

So just the same as the low-rise housing market, the typical condo in the Greater Toronto Area still saw significant price increases based on the Benchmark value, despite the slowdown in volume.

Speaking of volume, as expected, the month of April saw a decrease of -67% in sales volume for April 2020 compared to the same time last year in April 2019. And this makes sense because the vast majority of individuals were very cautious around covid-19. Many buyers continued to stay isolated at home instead of going out to see properties.

And of course there were much fewer listings since the majority of individuals would only list a property that is vacant.

So just remember when you see the media reporting that sales were down by -67% in Toronto for the month of April, they are correct. However, just remember that sales volume has nothing to do with home values. A home price is very different from the actual number of sales that are going on in the city.

Now for investors, let's talk about the rental market.

There's over 7,000 Airbnb rentals in the Toronto area and over the past month more than 1,500 of those properties have been listed on the rental market to secure a traditional one year lease or they've been listed for sale. Now due to this sudden increase in inventory, some buildings and some neighbourhoods are seeing a slight decrease in rent prices.

During the first quarter, the number of rental properties was up by as much as 31.9% compared to last year's first quarter. And again, this is largely due to the Airbnb properties coming onto the market looking to secure a traditional one year lease.

Now in terms of final thoughts there is of course uncertainty as to how other Industries or how the global economy will have an impact on our local real estate market. That being said, the only market that we know about is what we're in right now and what has happened historically. I know there are a lot of buyers in particular who are on the sidelines, some of who may have been discouraged because they've lost many multiple offers in the past.

Well, if you've ever said that you wish you could have gotten that dream home, or that dream condo without having to compete with five or ten other buyers, here's your opportunity. Because there is a lot of uncertainty still and the volume of buyer showings is still significantly down, it creates a unique opportunity for buyers to consider purchasing a property at this moment.

Not only that, but depending on the property and the circumstances, you can most likely submit an offer that is conditional on a home inspection so that you can do your due diligence. In comparison, in a heated seller's market that we were in previous to covid-19, most offers had to come in firm with no conditions.

So reflect on the opportunity that's here right now and decide if it's right for you to move forward on it, especially if you're looking to purchase real estate for the long-term hold, which is what I always recommend. For buyers who are on the sidelines right now, I encourage you to take a look at the historical data, which goes all the way back to the 70s. And what you'll notice is that the Toronto real estate market has proven to be extremely resilient.

So I'm curious to hear what your thoughts are on the Toronto real estate market so far and perhaps where you think it might be heading this year. Let us know in the comments below.

Now, you know, I'd love the opportunity to speak to you about real estate. If you have any real estate questions or needs, give us a call.